Hey y’all.  Boots here.  And as we are going into hiking, camping, and glamping season, I am thinking about ways to keep your coffee hot and your coffee cold.  In other words, we are going to be talking about thermal mugs, insulated containers, and the good ol’ homely, tried-and-true coffee thermos in the next few posts.

I can’t even think of the word thermos without thinking about this one couple who used to go out with us on the annual pack trip into the high country each August.  Bill and Doreen Banks were regulars, and they were always toting the same damned banged-up green thermos each year.

Now this thermos had to be one of the most trail-worn thermoses I have even seen.  It was one of those tall green Stanley models that looked like it had been handed down through the ages since the dawn of Manifest Destiny.  You couldn’t help but think of all the lunch hours and picnics that this thermos must have poured its way through to get that mean looking.  It was scarred up, dented, and ugly, and it truly was a testimony to the quality of the Stanley company’s product line.  It was still keeping the Banks’ family coffee hot through all of the abuse it had been subjected to.

This couple, Bill and Doreen, would prepare their coffee together each morning before we saddled up and headed out for the day.  They liked to have a little coffee break with their lunch, and experience had taught them that we didn’t build a fire for just a quick lunch along the trail.  Hence, the necessity for the beloved Stanley. 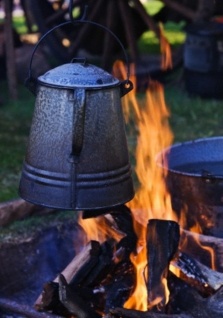 One of them would pull the coffee boiler from the fire while the other readied the Sacred Stanley to receive its daily sacrament of Joe.  Usually Bill poured and Doreen steadied.  Doreen would cluck about the importance of being careful while Bill filled the Stanley to the very brim.

The funny thing was that these two were so proud of their Stanley.  Like it was a badge of honor that they were still toting the same crappy-looking thermos that Bill’s dad had  used when he was alive and working for Boeing.

Maybe it was a lesson in equating age-worn with beautiful. Maybe the Stanley was a testimony to their marriage and a symbol of the trust that they shared.  Or maybe it was a lesson in forgiveness the way that Doreen didn’t cuss Bill out when he splashed her hands with hot coffee as she steadied the Stanley.  Or maybe they were just super cheap people and weren’t about to replace function with shiny new.

I don’t know.  It was way out of my ken.  Other campers would comment on the Stanley’s condition, and Bill would launch into the story about how his dad, Bill the Second, carried it with him to work each day for 20 odd years — all while Doreen would talk over Bill’s tale, adding minor and odd details as to how old Bill’s dad was when he was forced to retire or how many years ago it had been when the two of them had laid claim to the Stanley after Bill Senior’s funeral.

The year came when Bill and Doreen arrived in camp, still with their beloved Stanley.  The first morning in camp, I couldn’t help but notice that the thermos was missing its  lid.  A small part of me wanted to laugh — thinking that there must have been some lulu of a story to explain the carelessness or forgetfulness that led to the decapitated Stanley.  I assumed that we would hear, in full Technicolor, the chain of events that would explain why their Stanley was missing its salutatory cap.

I imagined that Bill had left the cup on the hood of the car after a roadside coffee break, or Doreen had forgotten it on some boulder alongside a creek while picnicking.  It wasn’t until the next morning, when I overheard Doreen fussing over Bill and insisting that he let her pour the coffee, that I knew something wasn’t quite right.  Bill’s hands shook as he tried to steady the thermos for Doreen’s inexpert pouring.

I came to find out later that night over campfire coffee nudges that the Missing Stanley Cup incident was a result of Bill having been hospitalized for several weeks in the months prior.  Doreen dutifully brought him his daily coffee in the trusty Stanley during his stay, and it was believed that one of the nurses on shift had thrown the cup/lid out, mistaking it for garbage.  The outcome of Bill’s hospitalization was still uncertain and they weren’t sure what would allow for Bill in the coming year, but they were grateful that they were able to make one more trip together into the high country before things had the opportunity to go south.

Well, you could have knocked me over with a flicker feather the next year when Doreen showed up.  Alone.  What surprised me wasn’t that Doreen was toting that damned Stanley . . . it was that it had taken on another function as Urn.  Doreen was carrying Bill’s ashes in it and was wanting to bury Bill up in the meadow at Emerald Camp.

We made camp late that afternoon at Emerald Camp and, after dinner,  Doreen asked me if I would grab a camp shovel and  walk with her.  She stopped at a spot that Bill used to called Turtle Pie Rock.  I never knew why he called it that, but Doreen was clear that that was the spot for Bill.   What surprised me was that Doreen wasn’t planning to scatter Bill’s ashes; the Stanley was going to be buried in the hole right along with Bill.

I dug for a spell until Doreen told me to stop.  She laid Bill and the Stanley to rest, and I can’t tell you how enormous that moment felt.  I have been to funerals before, and have shed my share of tears.  But this.   Seeing someone being laid to rest in one of his favorite spots on the planet in a damned thermos gave me pause.  I could see how our physical selves all truly return to the ash from whence we came.  The Cycle of Life is enormously dizzying and, if we are lucky, we have someone special in our life who we can hold on to to ease the spin.

We paused before I was instructed to fill the hole.  We looked at each other briefly, and I had tears in my eyes.  Doreen looked away and started to laugh.  A sad laugh filled with stories, tears, fears, and thanks.  Maybe a few regrets.  Regrets that Bill wasn’t there to appreciate the irony about being buried in their Stanley thermos in the middle of the wilderness.  A laugh that spoke of years that had been marked by the zeniths that spiked their days with their unexpected nature of the good, the bad, and the ugly.  And the breathtakingly simple and beautiful.

When we returned to the campfire, I laid a blanket around Doreen’s shoulders.  I poured her a Coffee Nudge and sat with her for a while.  No one else knew that she had just laid her best friend and husband to rest.  It surely does occur to me that hidden sorrow has to be one of the most difficult things that we carry with us in life.

And it just goes to show.  Maybe thermoses, like some marriages, are age-worn on the outside while they still keep the brew nice and hot on the inside.   I really had to hand it to those two.  And to Doreen in her commitment to lay Bill to rest in such a beautiful way.  In spite of Doreen’s shaky year of loss and grief, she was still out doing what she and Bill loved to do, and she arrived toting that same damned Stanley one last time to prove that some things just don’t change.  Won’t change.

Regardless, I think that this thermos has to be the best one on the market!  Just call this Cabin Door Store post “Ode to Stanley and Bill.”

Happy fulfilling trails to you from the bottom of my heart,

2 thoughts on “Ode to the Beat-Up Thermos, Marriage, & the Cycle of Life”